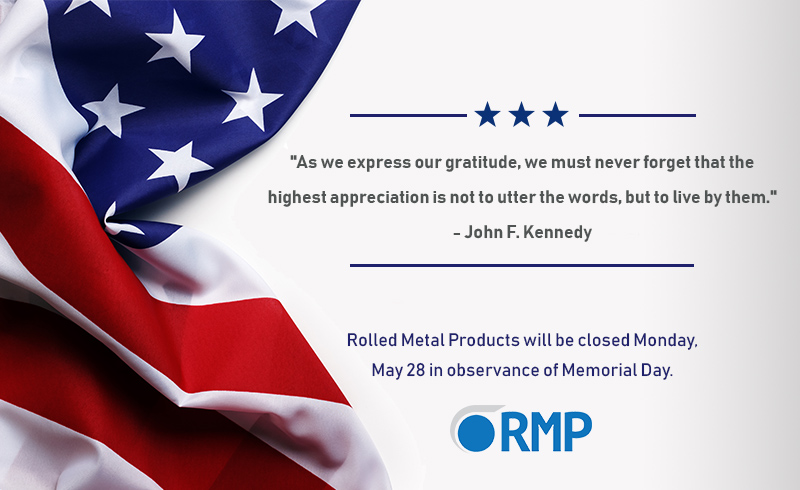 In Honor of Those Who Served

Rolled Metal Products will be closed Monday, May 28 in observance of Memorial Day. We will return Tuesday, May 29.

We wish you and yours a happy and safe Memorial Day weekend.

The History of Memorial Day

Three years after the Civil War ended, on May 5, 1868, the head of an organization of Union veterans — the Grand Army of the Republic (GAR) — established Decoration Day as a time for the nation to decorate the graves of the war dead with flowers. Maj. Gen. John A. Logan declared that Decoration Day should be observed on May 30. It is believed that date was chosen because flowers would be in bloom all over the country.

The crowd attending the first Memorial Day ceremony at Arlington National Cemetery was approximately the same size as those that attend today’s observance, about 5,000 people. Then, as now, small American flags were placed on each grave — a tradition followed at many national cemeteries today.

“We do not know one promise these men made, one pledge they gave, one word they spoke; but we do know they summed up and perfected, by one supreme act, the highest virtues of men and citizens. For love of country they accepted death, and thus resolved all doubts, and made immortal their patriotism and their virtue.”

Go to Top
We are hiring →Learn More
+